About The Stage Company

The Stage Company – Meltham is the latest incarnation of the theatre group which started out as Slaithwaite Methodist Church Amateur Operatic and Dramatic Society in 1949. 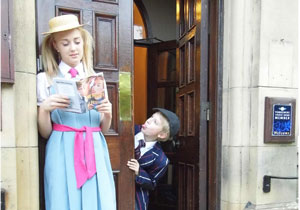 In those early days, the productions were Gilbert & Sullivan Operettas and Plays which were performed in the Civic Hall in Slaithwaite.

The repertoire gradually grew to include other popular operettas of the day and a fine reputation was forged particularly in respect to the singing and musical accomplishments of the Society. The Society moved from the Civic Hall to the larger Slaithwaite Leisure Centre in 1976 and continued to enjoy a large following. Pantomimes were still performed in the Civic.

Slaithwaite Stage Company grew and grew branching out into plays, musicals and murder mysteries to much acclaim performing at Slaithwaite Civic Hall and Meltham Church Hall. In 2010 the Company moved to Meltham following the temporary closure of the stage facilities at Slaiithwaite Civic but the move became permanent when the stage was not re-commissioned by the Local Authority.

With the move to Meltham being made permanent and a partnership with the Church Hall being formally established it was decided to re-name the group to fit its new home and so 2013 The Stage Company – Meltham was born!